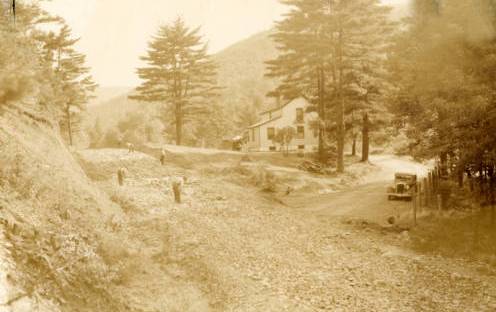 Chances are motorists heading south leaving South Williamsport via mountainous Route 554 are most likely oblivious to the historical significance of the landscape flashing by their vehicle’s path.

The once prosperous and popular Mountain Beach, a revered swimming and recreational attraction, is now occupied by an apartment complex; several hundred yards away, the area that once housed the circus lions trained by Prince El Kilcordo in the 1950s & 60s is overgrown and undistinguished; and further along the road, the old “stone quarry,” frequented by marksmen, climbers and promiscuous teenagers, is now a working aggregate facility.

Today, if a traveler was looking for South Williamsport overnight lodging, his choices would be limited to the Red Roof Inn or the Ridgemont Motel, both located along nearby Route 15. But 120 years ago if a traveler was traversing this same route, on the opposite side of the road he could have checked in at the Big Summer Hotel, the brainchild of David Stuempfle, whose grandson, David W. Stuempfle, served as the principal at Williamsport High School in the 1960s.

Just before 1900, Steumpfle built the large frame hotel located along the existing Hagermans Run, now part of the Williamsport Watershed. It had a dining hall capable of accommodating 250 persons and included a dance hall and bake shop. A suspension foot bridge for pedestrians and a wooden bridge for horses crossed Hagermans Run to access the hotel. The initial plans called for the hotel to be served by a trolley line connection from Williamsport. Despite its potential capabilities, the hotel never proved profitable due mainly to the failure of the trolley syndicate to build the expected service line.

The hotel was razed in the early 1920s. The Steumpfle family turned a portion of the hotel into a summer cottage, which they used until the mid 1930s. In the 1940s, the area was lumbered, with about 200,000 board feet of lumber removed. Today the site is a white pine and hemlock grove located about two miles from Market Square and a half-mile south of South Williamsport’s borough line.