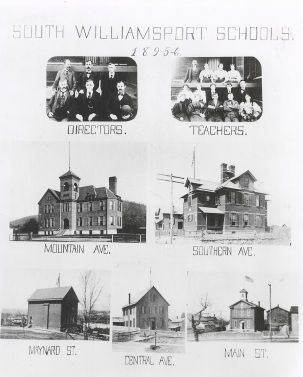 The Main Street school is presently the Clarkson building at the corner of Main and East Second Avenue. The Southern Avenue school was located at the parking lot between the CVS pharmacy and Woodlands Bank. The school was originally the High School until a new building was erected in the mid-1920s which is presently known as the Rommelt building.

The former High School then became known as Central Grade and housed grades one thru five. Another grade school was built on West Southern Avenue just beyond the intersection with Riverside Drive and became known as the Southern Avenue school. I believe the Central Avenue school was located at Clark Street and Central Avenue.  The Armstrong township school was located in Mosquito Valley and today there is a sign identifying the location.

Robin Van Auken is the founder of Hands on Heritage. She has extensive experience as a researcher, a writer, an educator, and a registered professional archaeologist – a skillset she uses every day as a cultural communication specialist. She specializes in working with communities, galvanizing individuals and groups to contribute their memories, photographs, and artifacts to develop legacy projects. On the web at handsonheritage.com View all posts by Robin Van Auken